When it comes to media streaming devices, the Apple TV is unquestionably the best option. Play games, watch movies or listen to music on your TV without using a phone, tablet, or PC. It works as an iPhone interface for your TV, but you have to use the included remote.

What is Apple TV Remote?

You don’t have to do anything to make the Apple TV Remote (also known as the Siri Remote) work with your Apple TV 4K after you get it. It’s as simple as plugging it in and starting using it right away. Even Apple’s gadgets aren’t perfect, as we all know. 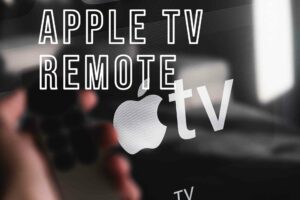 How to Pair Apple TV Remote?

There are several considerations to bear in mind when using an Apple TV remote instead of a Siri remote with your Apple TV. If your old Apple TV remote or Siri small battery dies, you’ll have to pair a new one. Connecting your Apple TV’s remote to the remote control helps the Apple TV respond instantly to your requests. The use of multiple unpaired Apple TV remotes to control the same Apple TV may cause interference when the devices are within the same range.

So far, every Apple TV has come with a battery-operated remote. The latest 4th generation Apple TV Remote’s battery life may be seen here.

Instead of a changeable battery, the new 4th generation Apple TV Siri Remote comes with a rechargeable battery instead of the prior Apple TV remotes.

This remote will require you to remove the old battery and replace it with a new one to function correctly. There was no way to see how much battery life was left. On the rear of the remote control, there is a coin-type lithium 3V battery (CR2032 or BR2032). The battery may quickly be taken out and replaced by a single person.

Now that the 4th generation Apple TV Remote or Siri Remote has a rechargeable battery. Apple estimates that a single charge will last around a month under normal conditions.

For the 4th generation Apple TV, the Siri Remote or Apple TV Remote needs to be charged for around two hours to reach 100% capacity. There is no charge indication on the remote, but you can see how much battery life is left by checking the battery level indicator.

Open the Apple TV’s Settings app to see how much battery life is left on your remote. You’ll discover the Remote section by going to the area under “Remotes and Devices>Bluetooth.”

The battery % for your Siri Remote can be found over here. When the remote’s battery is low, and Apple TV pop-up notifies you. Even better, you can ask Siri to show you the battery percentage, which will appear on the screen.

Why is Apple TV Remote not Working?

When the battery in the Apple TV remote is low, the remote will not work. To fix this problem, you’ll need to re-charge your Siri remote control. Charging the remote with the included USB cord is recommended.

Is there any Apple TV Remote Replacement?

For the most part, though, there are workarounds available. Some people use a conventional TV remote, while others use Apple’s software to replace the clunky one. If you purchase a different remote or a Siri replacement, you’ll need to connect it to your Apple TV first before using it.

Can we Reset Apple TV Remote?

Resetting your Apple TV remote can be done in several ways, but the simplest is to unplug your Apple TV device and try again. This procedure works for all remote models.

It gives you fine control over your Apple TV 4K and HD using the Siri Remote (2nd generation). Using the new touch-enabled click pad, you can click titles, swipe through playlists, and quickly fast-forward or rewind videos with a circular motion on the outer ring. You may also ask Siri to find something to watch with just your voice. As a result, to keep your apple remote safe, you should invest in the best cover you can find.

It’s important to realise that you can’t use the same Apple TV or Siri remote to pair with more than one Apple TV. To link a new Apple TV remote with an old Apple TV remote, you must either reset the old remote or move it out of Bluetooth range.

If you’re having issues with your iPhone, iPad, or Apple TV, please contact the official Apple store. Apple team will always be there to help you get things up and running quickly, with no hitches or data loss.

iCloud Shared Photo Library will not be available with iOS 16

How to record voice notes in iPhone