Apple introduced the iPad Air at its September 15 event and at the time, said that the tablet would launch at some point in October. We’re well into October, but Apple hasn’t provided more information on when we might be seeing the new ‌iPad‌ Air models. 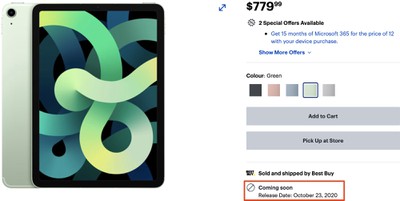 Apple’s website for the ‌iPad‌ Air still says “Available in October,” but Best Buy’s Canadian site is listing an October 23 release date, suggesting that the ‌iPad‌ Air could perhaps be available on the same day as the iPhone 12 and iPhone 12 Pro.

This date is not listed on Best Buy’s website in the United States, nor are other retailers providing a release date at this time so it’s possible that it’s not accurate, but a launch date on the 23rd alongside the new iPhones makes sense. If October 23 is indeed accurate, pre-orders for the ‌iPad‌ Air could potentially be made available this Friday.

The fourth-generation ‌iPad‌ Air models feature an edge-to-edge display and the same A14 chip that’s in the new iPhones, which could be why Apple is holding off on the ‌iPad‌ Air launch and waiting until the new iPhones become available. Apple may have wanted to prevent details about the A14 chip from leaking out before the ‌iPhone‌ 12 lineup was introduced, as the company typically introduces new chips in iPhones, not iPads.