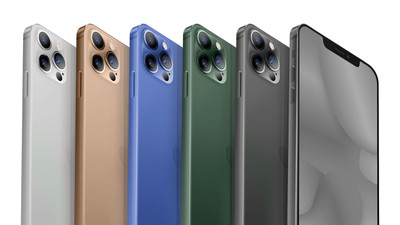 Weinbach states that the “most important things” about the new iPhones were already revealed by Chinese Weibo user “Kang” via an extensive leak on Friday, but he does offer some specific new information. Apple is reportedly still intending to ship the “dynamic zoning algorithm” feature, which could allow for faster Face ID. The notch may only be reduced in width on the 5.4-inch ‌iPhone 12‌ mini due to its smaller size. This would be achieved by arranging the components of the TrueDepth camera system more “tightly,” but at the cost of increasing its height. Alleged images of the ‌iPhone 12‌ mini’s screen emerged in July, which seemed to show a smaller notch.

https://t.co/EPj76hm9wZ The “dynamic zoning algorithm” is shipping. The redesigned TrueDepth Camera System though, is not. Instead, a more “tightly” arranged TrueDepth will be shipped with the 5.4″ iPhone. The notch shrinks horizontally, but increases slightly vertically. — Pine (@PineLeaks) October 11, 2020

Improved digital zoom will be achieved by combining several frames at different zoom levels and stacking them together – an hybrid of cropping and optical zooming. An algorithm based off of Deep Fusion will take care of correct alignment and sharpening. Smart HDR 3 does the rest. — Pine (@PineLeaks) October 11, 2020

There may also be “a sort of macro camera” feature and the ultrawide lens aperture on Pro models may also be able to get closer to subjects, although these are not expected to be headline features. The ultrawide lens is also speculated to have up to a 35% larger aperture to improve low-light performance.

The new Ultra Wide is definitely getting a larger aperture, which will result in significantly improved Low Light performance across the board. Again, pay attention to the 12 Pro Max. — Pine (@PineLeaks) October 11, 2020

https://t.co/XjFk5c1zNM Expect at least an 1 hour battery life increase for the Pro Models. As seen in internal tests, the 5.4″ ‌iPhone‌ will perform worse than the current ‌iPhone 11‌, which is expected because of its form factor. — Pine (@PineLeaks) October 11, 2020

Weinbach also reinforced previous claims about ‌iPhone 12‌ models likely supporting 4K video at 120 or 240 frames per second. The report is apparently based on recent updates from sources that were received over the past three weeks. The ‌iPhone 12‌ lineup is almost certain to be revealed on Tuesday at Apple’s “Hi, Speed” event.