Nov 17, 2020
Facebook’s Messenger and Instagram apps are getting a new vanish mode feature that gives users a new way to chat using disappearing messages in just one tap. 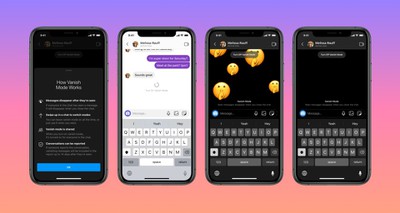 Disappearing messages can already be used in Messenger’s “secret conversation” feature, but they require several steps and users have to set a timer to make the messages disappear. However, the new “vanish mode” is enabled by simply swiping up in a chat, after which messages disappear after they’re seen, and if the recipient takes a screenshot of the conversation, the sender will be notified. Accessing the new mode in Instagram requires that users accept Facebook’s offer to integrate Messenger features into Instagram’s in-app chat. Facebook recently rolled out a new disappearing messages feature to all WhatsApp users on iOS and Android, allowing messages, photos, and videos to be marked to disappear after seven days. Vanish mode is available to Messenger users in the U.S. now and Facebook says the feature will expand to additional countries, and to Instagram, “soon.”

Why my iPhone not charging when plugged in?

Best internet providers near me – How to Find?