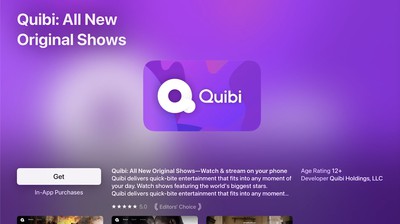 Quibi launched earlier this year in April with a smartphone-focused platform that had content meant to be viewed in a mobile-only format, but that has not proven particularly popular. Quibi is struggling, and is aiming to get more viewers by expanding to additional platforms.

Prior to launch, Quibi spent more than $1 billion creating original content, developing shows that are meant to be watched in short 5 to 10 minute snippets. Quibi has garnered around 400,000 to 500,000 subscribers who pay $4.99 to $7.99 per month for the service, but Quibi initially believed it would get 7.4 million subscribers within a year.

Quibi founder Jeffrey Katzenberg has been attempting to sell Quibi, but tech executives including Apple’s Eddy Cue, Facebook, WarnerMedia, and others have turned him down. Rumors now suggest Katzenberg may be planning to shut down the company,